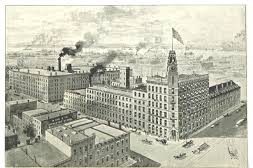 The first African-American newspaper in New York City, Freedom’s Journal, was established in 1827 by John B. Russwurm.

The means for a mass-producing wood type was invented by Darius Wells in New York in 1827. In 1828, Wells went on to produce the first known wood type catalog. 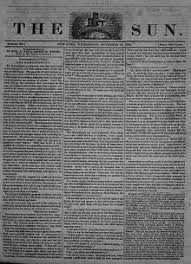 The Sun was known as “the penny press” because it only cost one penny to purchase. This was a reputable newspaper, popular for its illustrations and crime reporting, and was in a similar category to The New York Times and New York Herald Tribune.

Although the actual founding of the National Typographical Union Foundation was in 1852 in Cincinnati, Ohio, the framework for this important foundation was laid out in New York City in December 1850.

Linotype, the first successful automatic typesetting machine established in 1884, was installed by The New York Tribune in 1886. Linotype was a composing machine which produced lines of words in the form of single strips of metal. In the past, this was used primarily for newspapers, but it is rarely used these days.

Xerography, a dry photocopying technique, was developed by Chester S. Carlson of Queens, New York in 1938. This copy method is still currently used to make copies in an easy and efficient manner. 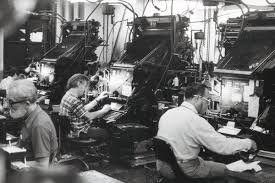 The last New York Times set by Linotype took place in 1978. This event was so momentous that it was featured in a documentary film called Farewell, Etaoin Shrdlu, a film which was made about a night at the New York Times on July 1, 1978. The film was made by David Loeb Weiss, a proofreader at the newspaper. The film focused on the last time the Linotype was used to produce the newspaper.

Contact us today to get started realizing your printing, copying, and promotional product goals and achieve your desired business results.

← Brochure Printing: What Are My Options?
How Are High Quality Brochures Printed? →